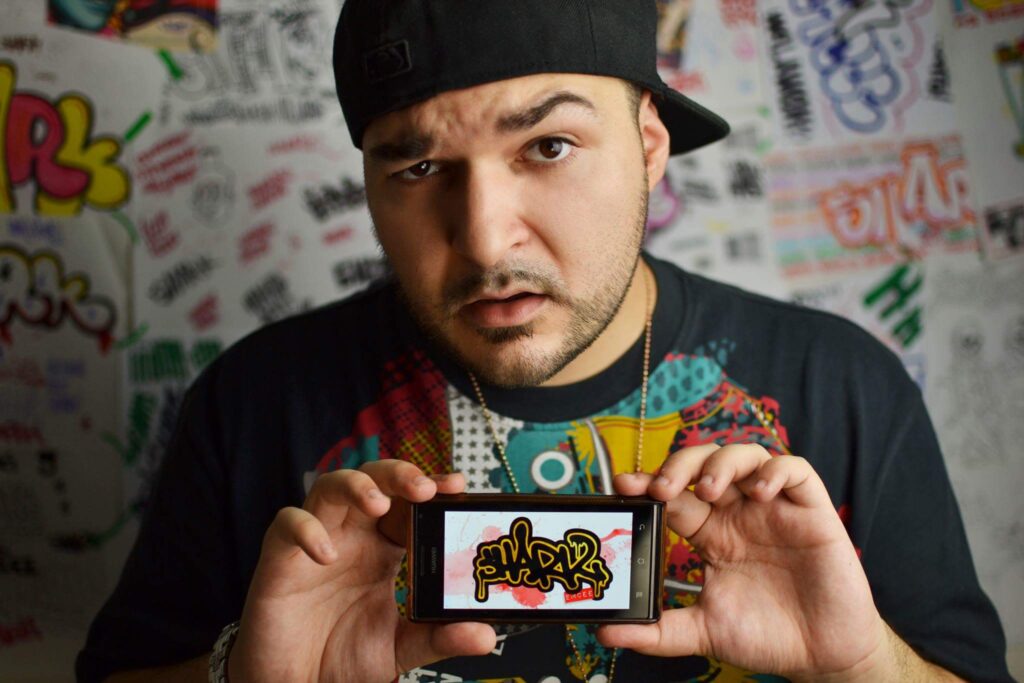 onvincing, ironic, in perfect balance between tradition and renewal,
Shark Emcee’s compositional style is essential but at the same time full of exciting nuances.
The cd “La trappola” is published in 2007 and is the debut album. the project generates considerable interest and several live in the area, expanding the audience of fans.
The album Made in Sann-Yo is the evolution of “La trappola”, the clip “Lunaviola” is published, the live shows multiply and the followers increase.
In December 2010 Shark Emcee publishes the first single / video clip as a solo artist: “Orgoglio Sannita”, which pushes the rapper from Benevento outside the underground circuit.
Interesting the citation and the airing of the song Orgoglio Sannita, in the radio program conducted by Linus “Deejay chiama Italia”, as a rap song dedicated to the Italian cities with the highest number of reports from the public.
In the meantime The clip exceeds 250 thousand views.
The activity of Shark Emcee sees him more and more often the protagonist of battles along the boot, which form, forge his personality and his style. He manages to earn the title of national champion at the prestigious contest “Microphone masta”.
In 2011 comes the second single “Ad ogni signorina”. the clip with – directed by Valerio Vestoso – won second place in the most important competition for Italian video clips “PIVI”.
Thanks to this result, the video clip is in rotation on the monitors of the subways of Rome and Milan, on Alitalia domestic flights and in various cinemas in the country.
In 2012 with the single / video clip: “Fattell ‘na risat”, and the featuring with the folk group of Campania Sancto Ianne in the single / video clip: “Guardame Sienteme” merge the folk and rap in a mixture of sound atypical and exciting.
On December 22, 2012 Shark Emcee launches his first solo EP: “I was a b.boy, please gimme a job”.
In the same year he was also the protagonist with Rocco Hunt, Fabio Mef, Doc Shock and Lucariello of “Il suono che parla” (The sound that speaks): a rap writing project for the inmates of the Juvenile Institute of Airola, after which a book and a CD were published.
In 2014 Shark Emcee ranks among the top 6 of the national freestyle tournament “Pass the microphone” at Alcatraz in Milan.In 2015 he presents the single “Non ho bisogno” to the selections of Sanremo Giovani.The rapper manages to pass the first selection (he enters the 60 finalists on 660 songs presented) by racking up compliments from the jury of quality during the final audition in the Rai studios in Rome. In 2016 he presented the single/videoclip “Delle volte” In the football season 2017/8 Shark Emcee was chosen as a correspondent from the stadium for the broadcast “Quelli che il calcio” in conjunction with the match Napoli-Benevento and Crotone-Benevento; occasions in which the rapper from Benevento showed off his skills with improvisation in rhyme. In 2019/2020 he returns to the scene with the singles “Fire on the Track” and “Boom”. His freestyler skills have also
have led him several times to share the stage with prominent artists in the national music world (Clementino, Rocco Hunt, Ghemon, Lucariello, Mama Marjas, Luca Aquino, Daniele Sepe and many others).
He currently collaborates with the singer Franesco Da Vinci and the producer Nathys as a songwriter.